The Fed will lift rates this week.

The Federal Funds Rate is set to rise on Wednesday as the fourth Federal Open Market Committee (FOMC) meeting of the year adjourns.

That will push up costs for home equity lines, credit cards, and other variable-rate loans.

But mortgage rates are doing just fine in the face of the impending hike.

Last week, Freddie Mac reported the third straight 2017 low of 3.89%. Thirty-year rates have dropped 41 basis points (0.41%) since March and are now holding at the lowest levels since November.

As a home buyer or refinance applicant, it’s an excellent time to be shopping for a mortgage rate.

Watching Mortgage Rates Ahead Of The Fed

Mortgage rates are down nearly one-half of one percent in the last three months. The U.S. presidential election catapulted rates to multi-year highs, but rates have been locked in a downward drift since then.

The mortgage rate market might have risen too far, too fast. It appears a correction is in full swing.

No one thought rates below 4% would be seen this year. Predictors had them pegged at 4.3% by now.

Despite low rates, mortgage shoppers must not grow complacent.

Before the historic election of 2016, everyone thought rates in the low- to mid-3s would be around forever. When rates spiked, home purchase and refinance applicants rushed to apply.

For many, it was too late.

Mortgage rates had hit a new normal, or so everyone thought. Today, there’s a second chance to lock in a rate in the 3s.

How long will these rates last? It depends on how fast the economy grows, and how hard the Fed will work to slow it down.

That’s a marked strategy shift for the Fed. Since the late 2000s, the group has rolled out program after program to goose the economy and stave off recession.

At one point, Great Depression 2.0 was a real possibility.

Thankfully, the tide has changed. Now the Fed has a new problem: keep growth (and therefore inflation) in check.

The Fed’s dual charter is to foster maximum employment and stabilize prices in the economy. In other words, the unemployment rate should be low, and inflation should be near 2% annually.

It can’t raise the Fed Funds Rate too quickly: sky-high rates could eliminate jobs and put companies on the defensive. But it can’t be too slow, either. That could lead to uncontrolled inflation.

The Fed, then, is the “Goldilocks” of the U.S. economy. It seeks balance. Economic activity should be, well, just right.

The group increased its benchmark rate at its March 2017 meeting, only its third hike in over a decade. The Fed’s May meeting was a real snoozer: no one expected a rate hike or major policy shifts.

A June hike is all but certain. Fortunately, markets have absorbed the news and rates are falling despite it. Don’t expect a big jump for mortgage rates on Wednesday as the Fed announces its rate hike.

Mortgage Rates: What Will Happen This Week?

Mortgage rates should not move much after the hike.

However, the greater unknowns live within the projection materials that the Fed releases as its meeting adjourns.

It publishes this document four times per year.

The last release, in March, revealed that the Fed would likely hike rates two or three more times in 2017. The higher end of estimates put the Federal Funds Rate near 1.625% by year’s end, up from 0.875% in March.

The Fed’s “dot plot” portion of the projection materials are perhaps the most interesting. Dots represent where each Fed member sees the Fed Funds Rate by the end of the year.

Most are calling for rates near 1.375%, meaning two more rate hikes in 2017, presumably in June and September. 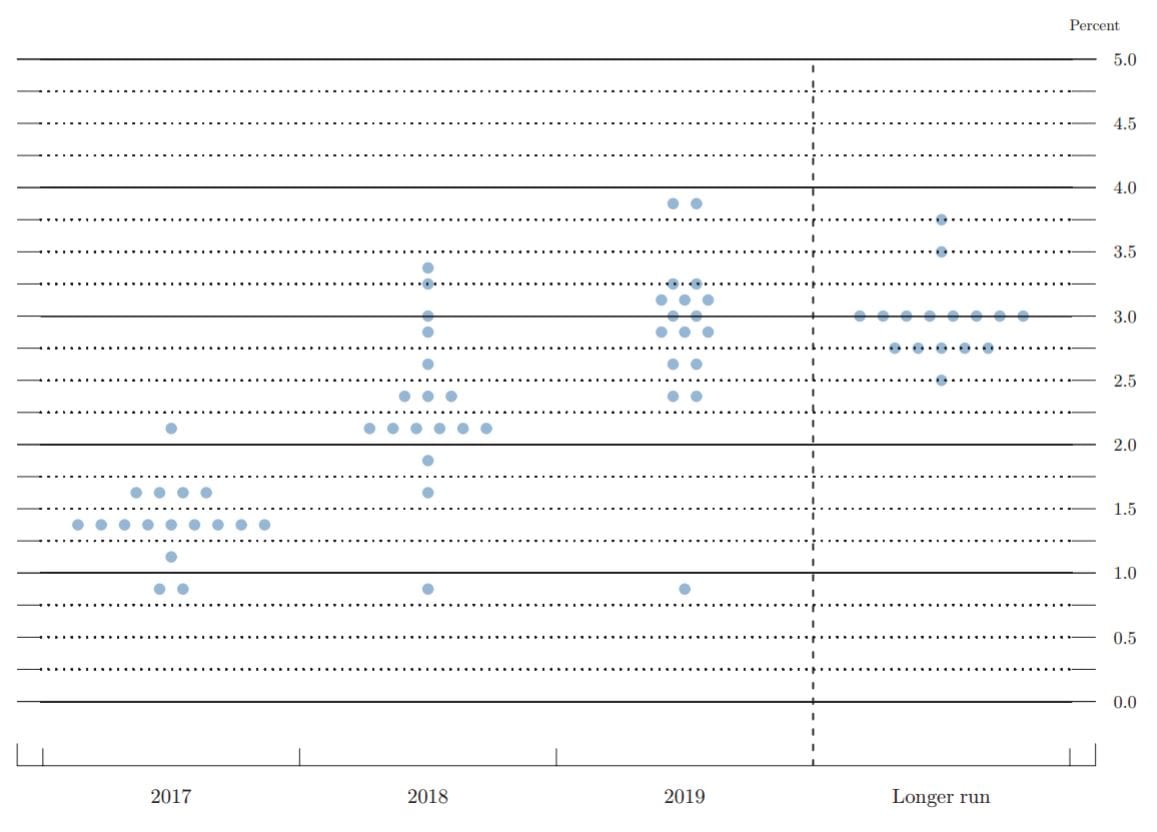 Any major changes to the dot plot could swing mortgage rates up or down. Markets would adjust to the new interest rate reality.

For example, if a majority of dots moved to the line above 1.5% in the 2017 column, rates could rise.

Note that the pace of rate increases might be dialed back, too.

The Fed tries to tame inflation with a higher Fed Funds Rate, but inflation is being plenty tame on its own.

It’s clocking at just 1.5% year over year. The most recent “Personal Consumption Expenditures”, or core PCE, reading fell from last month’s pace and remains well below the Fed’s target of 2% annually.

With such anemic data, the Fed could issue a soft statement. That would be great for consumer mortgage rates.

Rates cold be very different by week’s end. The big question that remains is, will they be higher or lower?

Rates are hitting 2017 lows. It could be a good time to lock.

What Are Today’s Mortgage Rates?

Mortgage rates are still low — for now. If you’ve been waiting to purchase a home or refinance one, consider moving up your timeline. Rates can change suddenly and without notice.

Get today’s live mortgage rates now. Your social security number is not required to get started, and all quotes come with access to your live mortgage credit scores.